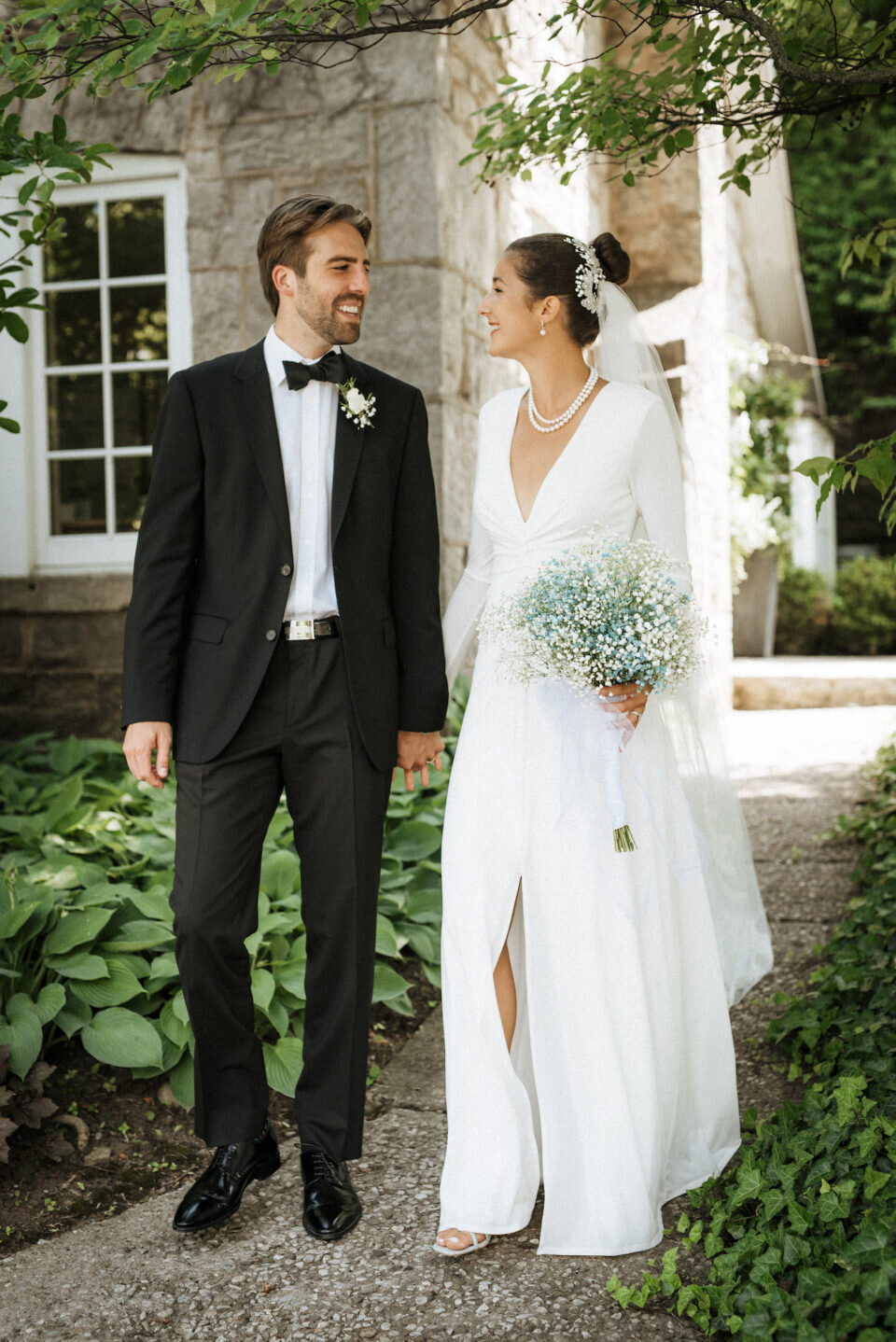 Inside a chic micro wedding at Ancaster Mill.

As told to Jean Grant for Toronto Life.

Olivia Kutlesa, a fourth-year dentistry student at NYU, and Dylan Hewko, a controller for the New York City Football Club, have been dating since 2013. They had planned a glamorous wedding for 200 guests at the AGO for the end of August, but were forced to cancel in May due to the pandemic. When Olivia’s family priest announced he would be retiring, they took the opportunity to hold an intimate, family-only Catholic church ceremony, followed by a celebratory lunch at the Ancaster Mill. Here’s how it came together.

Olivia: Dylan was from Caledon and I grew up in Stoney Creek and we met in 2011 at Queen’s University. We lived next door to each other in a residence called Chown, which is a historically all-female residence. That was the first year it was co-ed.

Dylan: I was studying commerce, and my roommate was in sciences with Olivia. They ended up becoming friends, but Olivia and I never formed much of a relationship.

Olivia: He definitely caught my eye at the time, but that was the extent of it. Years later, he told me I caught his eye, too. Neither of us knew at the time, so it never evolved into anything. After our first year, we lost touch. Then, at the end of second year, in 2013, we reconnected at a St. Patrick’s Day party on the street. I ran into him and we chatted in the middle of the craziness. I asked him out for coffee at the end, which finally materialized when we were both working in Toronto that summer.

Dylan: I was doing an internship at CIBC and Olivia was there for summer school, and we started meeting up for coffees and lunches. We liked each other, but I was hesitant to start anything serious because I was leaving to study in Germany for six months on a third-year exchange, starting at the end of first semester.

Olivia: I’m a spontaneous person, whereas Dylan’s more logical and such a gentleman. He didn’t think it would be fair to me to start a relationship. After a few weeks of not speaking, Dylan reached out to me to meet up. By the end of the date, on the rooftop of Jack Astor’s overlooking Yonge-Dundas Square, we realized we had something special and decided to give it a real chance.

By the time we were back at school in the fall, we had already fallen deeply in love. Before he left for Germany, he gave me an envelope containing a letter for each month he was away. The first one also contained a ring that he wore every day. I was so happy I called my mom immediately—I thought it was the cutest thing! I went to visit him that spring, and we explored France together. A couple of years after graduation, I left to study dentistry at NYU.

Dylan: I landed my dream job with the Toronto Blue Jays at the same time, and we planned on doing long-distance for the four years Olivia was in school. But a year and a half later, I followed my heart and began looking for jobs in New York to be closer to her. I decided to propose on a trip to Spain in June 2018, and asked her father for his blessing.

I spent months planning the perfect day, and hired a local photographer to meet us in Barcelona, where I was going to propose. It was more stressful than I imagined: I was on my phone the whole time, trying to lead Olivia to the Gothic Quarter, navigating all these confusing alleyways. When we finally got there, the photographer emailed me saying he was going to be an hour late. I managed to kill time and arranged to meet him outside the Santa Maria Del Mar church. That’s where I proposed. There were about 15 schoolkids on a field trip who all started clapping and cheering. Then, after I landed a job with the New York City Football Club, I finally moved to New York in November 2018.

Olivia: We looked at a few venues in Toronto, because it’s the halfway point between our families’ homes, and a great destination for travelling guests. When we saw the AGO I knew it was the place. When you walk into Walker Court, it’s filled with sunlight, and although it’s not a religious building, it feels holy. It’s got a deep sense of calm and stillness that forces you to be present. We planned the wedding for August 29 for about 200 guests. Dylan was born in Edmonton, so he had lots of family flying in from out west, and I had family coming from Croatia as well as friends and colleagues from the States.

We put so much time and effort into planning everything down to a tee. It was going to be classic sophistication meets ethereal romantic. I imagined a French chateau vibe, with velvet couches and impressive lighting and chandeliers hanging from the ceiling. We had a fabulous deconstructed blue flower arch created for the ceremony, designed to complement the exhibit on Picasso’s blue period scheduled to be showing at the time.

Dylan: At the end of March, we started hearing about friends cancelling their weddings in June. But we never thought we’d have to delay ours at the end of August.

Olivia: Then, one morning in late May I got an email from the AGO saying it would be smart to think of a new date. We wouldn’t be able to have our wedding, mostly because of how many guests were coming from out of town, and we didn’t know when the ban on gatherings was going to be lifted. We didn’t want to risk anyone’s safety, or risk that the government’s ban on large gatherings wouldn’t be lifted. We took it pretty hard, and did nothing for a while. Around that time we moved back to Canada, going back and forth between our parents’ places in Caledon and Stoney Creek. In June, my parents told me that our longtime family priest, Father Charlie Galea, the man who had baptized me and married my parents, was about to retire. I suggested that before he did, perhaps he could perform an intimate ceremony for us and our immediate families. My mom got in touch with Father Charlie, who said it would be his greatest privilege before retiring.

Dylan: We only had three to four weeks to plan, which isn’t a lot of time, even for a micro wedding. There were still a lot of obstacles we had to overcome. At that time, most places were still closed and the regulations were constantly changing. We chose to get married on Canada Day because it was a special day to celebrate amidst all of the uncertainty. We love Canada, plus, it meant we’d also get our anniversary off every year. We plan to eventually move back to start a family.

Olivia: We wanted to officially get married now, instead of postponing it to next year, because we were ready to become our own family. It felt right.

Dylan: Toronto and the surrounding cities still weren’t issuing marriage licences. We felt defeated, but I kept calling around and found out Orangeville was giving out five per week. We were the second couple to get a licence. We also wanted to find a venue for a celebratory lunch after the church ceremony, but it proved very difficult. At one point we thought we’d have to celebrate in a park. We were thrilled when the Ancaster Mill agreed to host us.

The morning of the wedding, I got ready at my sister’s house in Burlington with the rest of my family. We celebrated with champagne and headed over to the church, Incarnation of our Blessed Lord in Hamilton. Olivia’s family followed Father Charlie there in 2000 when he relocated from St. Luke’s. They had blocked off some aisles with yellow tape, and there were floor decals pointing where to go.

Olivia: My parents and I woke up really early at their house in Stoney Creek. We drank coffee, laughed and danced to music in the kitchen. I got my hair and makeup done at my cousin’s house, and wore a dress I ordered from Net-a-Porter. White Toronto was able to order in my original veil from Montreal. Before the ceremony, we had a small family gathering at my parents’ house to take a few pictures and pop champagne. My aunt had decorated the house the day before in white ribbons and baby’s breath flowers. I even bought a little tuxedo for my dog, Duke.

At the church, Dylan and I wrote each other letters that we read separately before the ceremony. We played music out of a Bluetooth speaker with songs we found on Spotify. We walked down the aisle with our parents to an instrumental version of Elton John’s “Your Song.”

Dylan: We never had a rehearsal, so everything was on the fly. We sent out a Zoom link to our closest friends and family, and there were people from all over the world watching the ceremony.

Olivia: My friends said people were tuning into Zoom like it was the Royal Wedding. My maid of honour was in Sydney, and she woke up at 3 a.m. to join, which meant the world to me. Dylan and I were both so happy and emotional at the altar—I remember looking into his eyes and trying really hard to put on a brave face.

Dylan: After the ceremony, we went to the Ancaster Mill. We were greeted with drinks and hors d’oeuvres. They have a gorgeous veranda that’s covered in vines and flowers. Once we finished our photos, we ate a lunch of seasonal vegetables with braised short ribs, herb-roasted chicken and salmon with salsa verde. For dessert, Olivia’s best friend and bridesmaid made us a delicious gluten-free, vegan, vanilla-lemon cake topped with fresh garden strawberries.

Olivia: I bought the topper online and had it customized to look like us.

Dylan: My favourite part of the day was the ceremony. I had my brother by my side, and as I watched my bride walk down the aisle, I was overcome with happiness. She looked so beautiful. I’ve loved her since I was 20, and finally it was our time.

Olivia: Because it was so small, I had the time to constantly reflect on what was going on. I thought about why I was getting married to Dylan, and it made my heart so happy to know that I was making the right decision. We also had the privilege of having our families there, including my mom, who’s a recent cancer survivor. The last couple of years were really tough, so that meant the world to me. I felt so blessed by God and loved by my family in that moment.

Dylan: What started off as something really disappointing turned out to be a special day we will remember forever. It was always about Olivia and I. We never needed the bells and whistles.

Olivia: It made us realize that we didn’t need a glamorous wedding to make us happy. It’s the simplest things—the ones money can’t buy—that make our hearts feel full.

PrevPreviousIs my Special Day Still Special? Tips on How to Honour Your Original Wedding Date